The 1905 Lewis and Clark Exposition 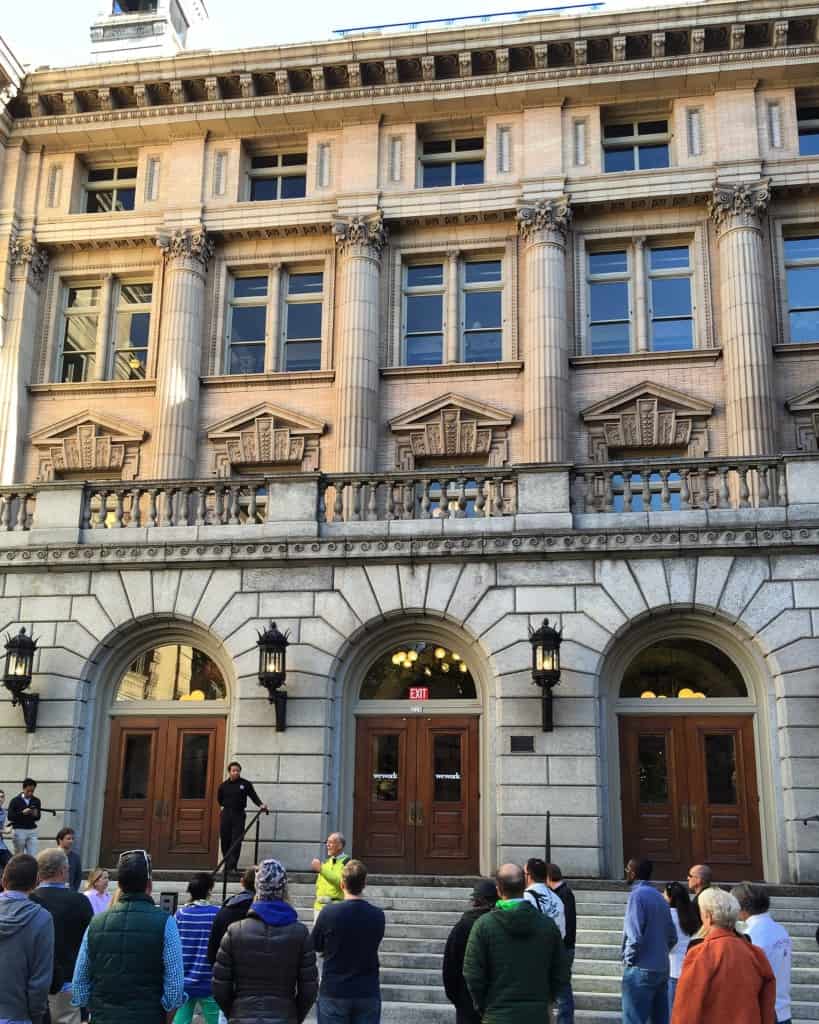 I recently moved my office into the newly renovated US Custom House in downtown Portland Oregon. This gorgeous newly renovated building has been vacant for 12 years, and it feels incredible showing up to work here every day. Recently local Portland Architectural Historian Eric Wheeler came in and gave us a fantastic tour explaining the very rich history of our beloved US Custom House.

After that talk was over, I approached Eric to see if he would be interested in writing a guest blog post on Young Architect about the 1905 Lewis and Clark Exposition. I have always been fascinated with this story, and I live very close to where the event took place. For the past few years, I had been collecting photographs from that event 110 years ago.

Eric was super excited to share his expertise and wrote this beautiful blog post with the images I have been collecting.  All the images from this blog post have come from Vintage Portland and the City of Portland Archives.

Lastly, Eric Wheeler hosts fun walking tours around town discussing the history of Portland. I highly recommend these tours enough to anyone who is interested in learning more about our beautiful city.

The 1905 “Lewis and Clark Centennial, American-Pacific Exposition and Oriental Fair” 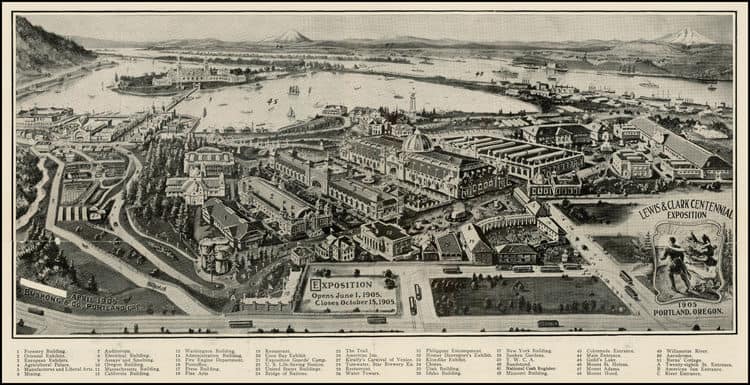 Much more than a celebration of the centennial of the Lewis and Clark Expedition, as the official name of the event indicates, the fair was a pivotal event in Portland's history. Opening on June 1 and running until October 15 the Expo attracted over a million visitors and provided an opportunity to celebrate both the past and the future of the Pacific Northwest, and Portland in particular. The fair was significant for three reasons:

1- The Expo provided a showcase for the wealth of regional resources, especially agricultural and timber, and the economic opportunities the provided.

2- The success of the fair highlighted the emergence of Portland as the major metropolis of the Pacific Northwest.

3- The fair ignited a boom in population, construction and general economic growth that lasted for nearly 10 years.

In the three decades around the turn of the 20th century several cities hosted summer-long “Expositions” that were a combination showcase for emerging technologies and municipal self-promotion and state fair/amusement park. Following a pattern established by the London Expo of 1851, which featured the enormous cast iron-framed Crystal Palace, and the Paris Expo of 1889, for which the Eifel Tower was built; many US cities did their best to outdo each other with their own grand exposition.

Best known are the Chicago World’s Fair of 1893, the Omaha Exposition of 1898 and the St Louis World’s Fair of 1904.  In 1905, Portland was the first West Coast city to host a fair; followed by Seattle, San Diego and San Francisco. Competition for foreign and domestic trade between these cities was fierce. Each of these cities hoped to attract immigrants to expand the labor force necessary for the growing manufacturing and transportation economy.

The city of Portland, which was essentially a trackless wilderness in the 1850s, emerged within a half century as the major manufacturing, retail and transportation center of the Pacific Northwest. Transcontinental rail connection in 1883, bridge building across the Willamette starting in 1887 and the development in the 1890s of the third largest electric streetcar network in the US, all contributed to Portland’s dominance of trade in the Columbia River basin.

Portland’s top business and civic leaders began planning the Lewis and Clark Expo in 1901, and by all accounts, succeeded in creating a four-and-half month long advertisement for the people, products and place that was Portland one hundred years ago. Over 1.5 million visitors came to the Fair impressed by the landscape, climate, and business potential of the city.  The impact of the fair on the growth of the city is well documented. The population of the city doubled from less than 100,000 in 1900 to over 200,000 by 1910. All economic indicators, especially new construction, show a building boom that lasted for nearly ten years, from 1904 to 1914.

Another somewhat intangible factor is the sense of pride in community that was enhanced by the success of the fair. The 1905 Expo provided the interest and enthusiasm for the famous Rose Festival that became a city-wide event in 1907. The motto of the fair was “Westward the Course of Empire Takes Its Way”. Symbolic in that the Lewis and Clark Expedition of 1804-1806 was the reason for the choice of the centennial year for the fair, even more significant was the realization that Portland and Oregon represented the expansion of the American Empire from coast to coast, and the end of the great American frontier. 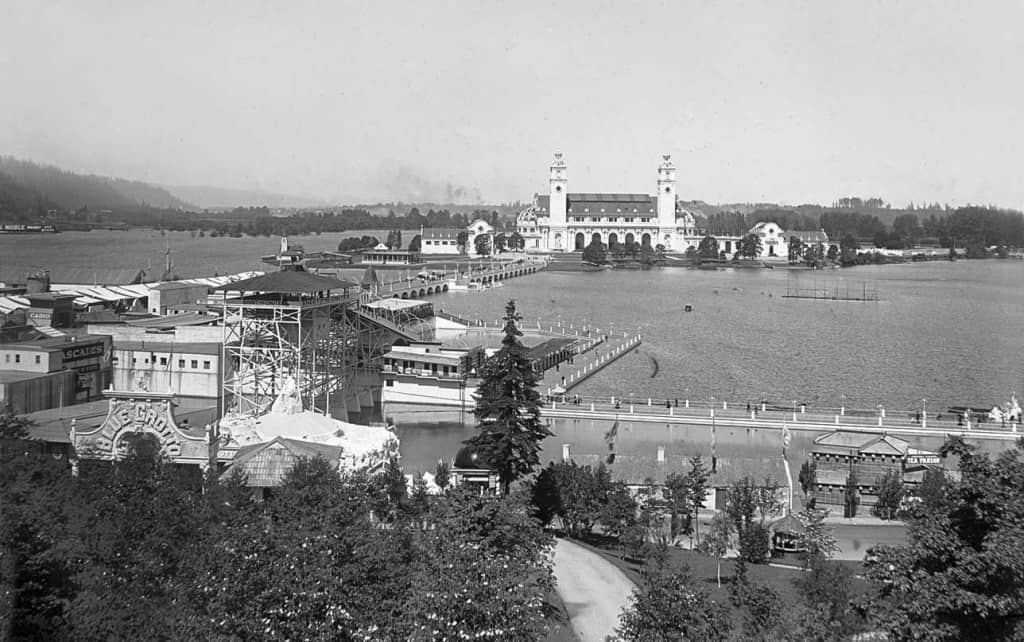 Guild’s Lake – Guild’s Lake, a large shallow body of water, was basically an oxbow slough of the Willamette River, in most places no more than 3 feet deep. Several other sites were under consideration, including University Park in North Portland and Sellwood Park in the south east. Guild’s Lake won out for a number of logistical reasons, but may have been more a result of political and financial maneuvering. The lake was dredged for the Fair and a constant supply of fresh water was piped in from the nearby Willamette River. 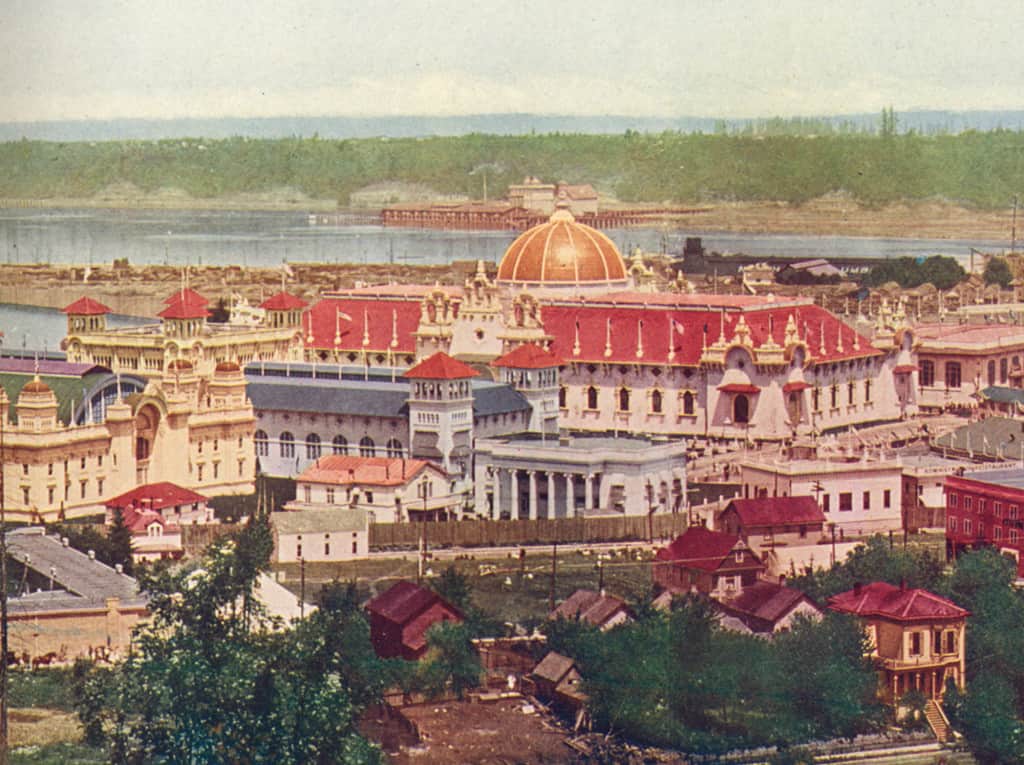 NW Portland surroundings– This photo shows the dramatic contrast between the working class neighborhood just to the south of the Fair and the glitz and glamour of the fairgrounds. The architectural motif that the Fair Committee selected was Spanish Renaissance Revival;  somewhat odd choice knowing that this style was more suited historically to Southern California. The director of architecture was Ion Lewis, a partner in the firm of Whidden and Lewis; the dominant architects of the day in Portland. Whidden and Lewis are best known for their designs of Portland City Hall (1895) , Multnomah County Courthouse (1911) and dozens of high-style Colonial Revival mansions on the west side of the city. Lewis’ firm designed five of the major buildings for the Expo. 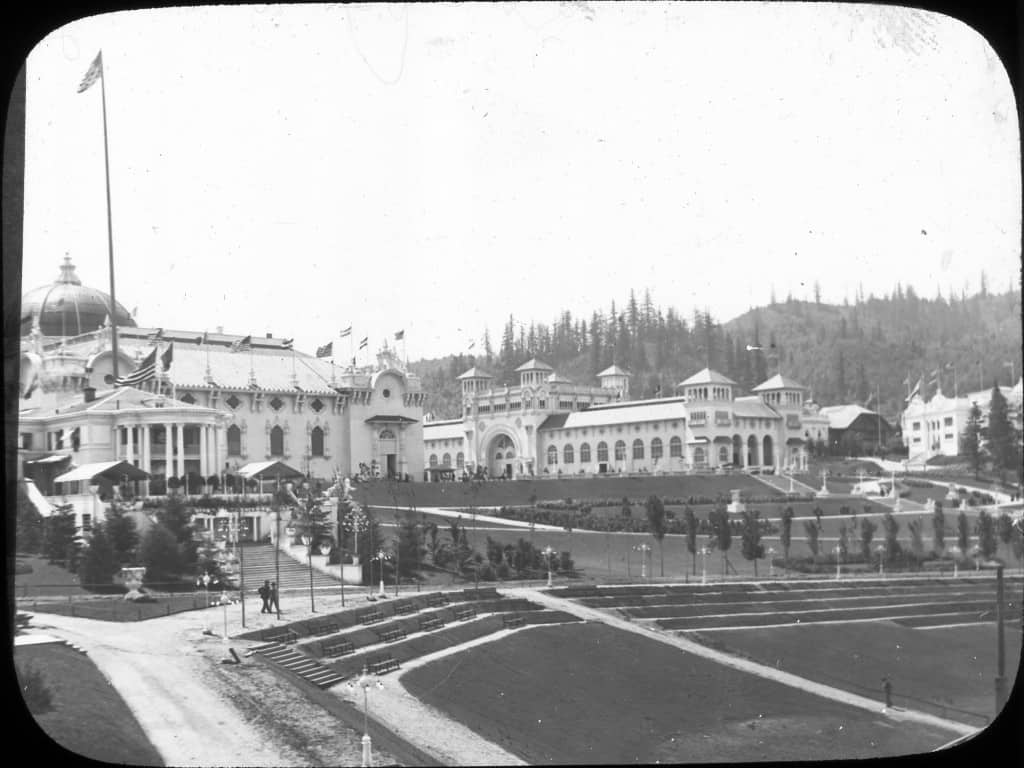 Olmsted Plan – John Olmsted, son of Frederick Law Olmstead, visited Portland in early 1903 to start work on a city parks plan. At the same time, the Fair Committee hired Olmsted to design a plan for the fair. Most of Olmsted’s suggestions were followed in the development of the fairgrounds. The discipline of Landscape Architecture was sweeping the US in the early years of the new century; and became a key element in the City Beautiful movement of the early 20th century. 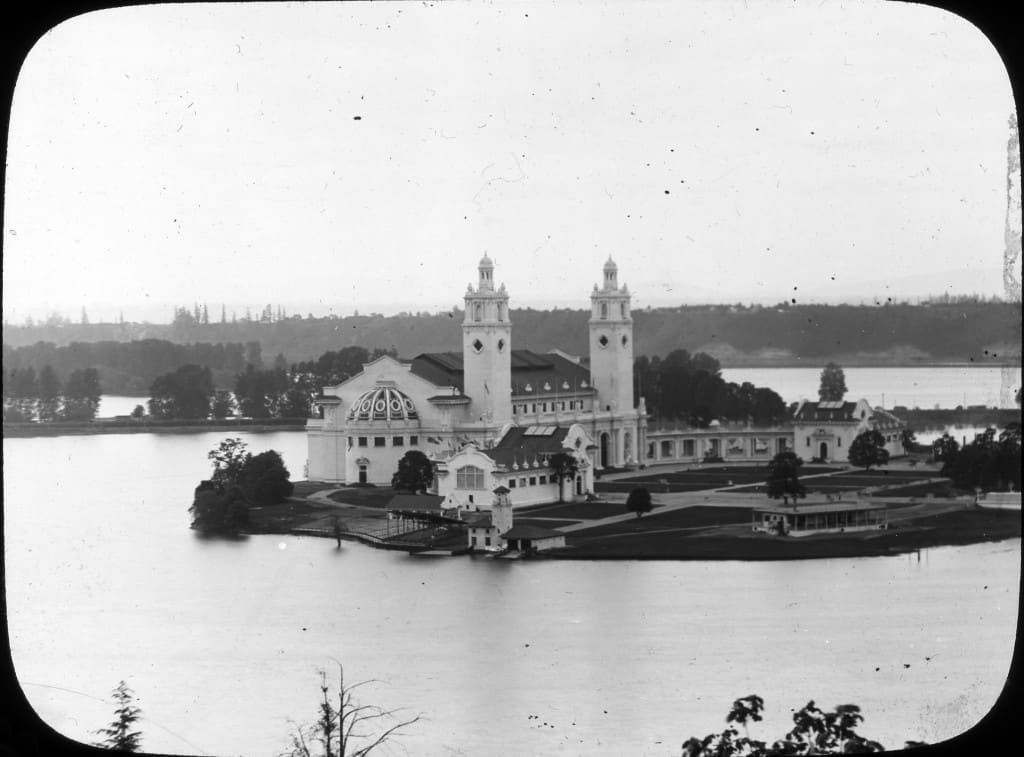 US Government Exhibit Hall – Sited in the middle of Guild’s Lake on a peninsula, The US Government building was the fair’s largest edifice, covering over 70,000 square feet. The US Government building was flanked by two 200 foot colonnades, clearly referencing a Roman temple. The architect was Washington, DC based federal architect James Knox Taylor. Just a few years earlier, Taylor and local architect, Edgar Lazarus, collaborated on the Beaux Arts style US Custom House (1901) 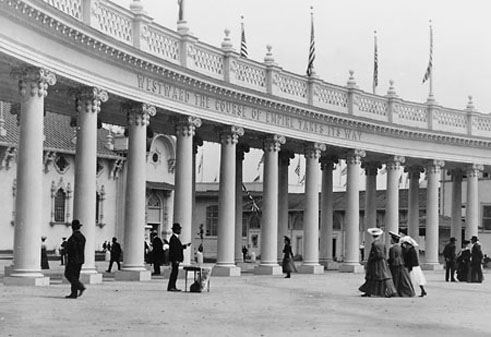 Colonnade of US Government Building – This classical colonnade, flanking the US Government Building, is comprised of Ionic columns and ornate balustrade has an entablature inscribed with the fair’s motto, “Westward the Course of Empire Takes It’s Way”.  The federal presence on the highly visible peninsula in the middle of Guild’s Lake symbolized the accomplishment of Thomas Jefferson’s early 19th century dream of a coast to coast American Republic. 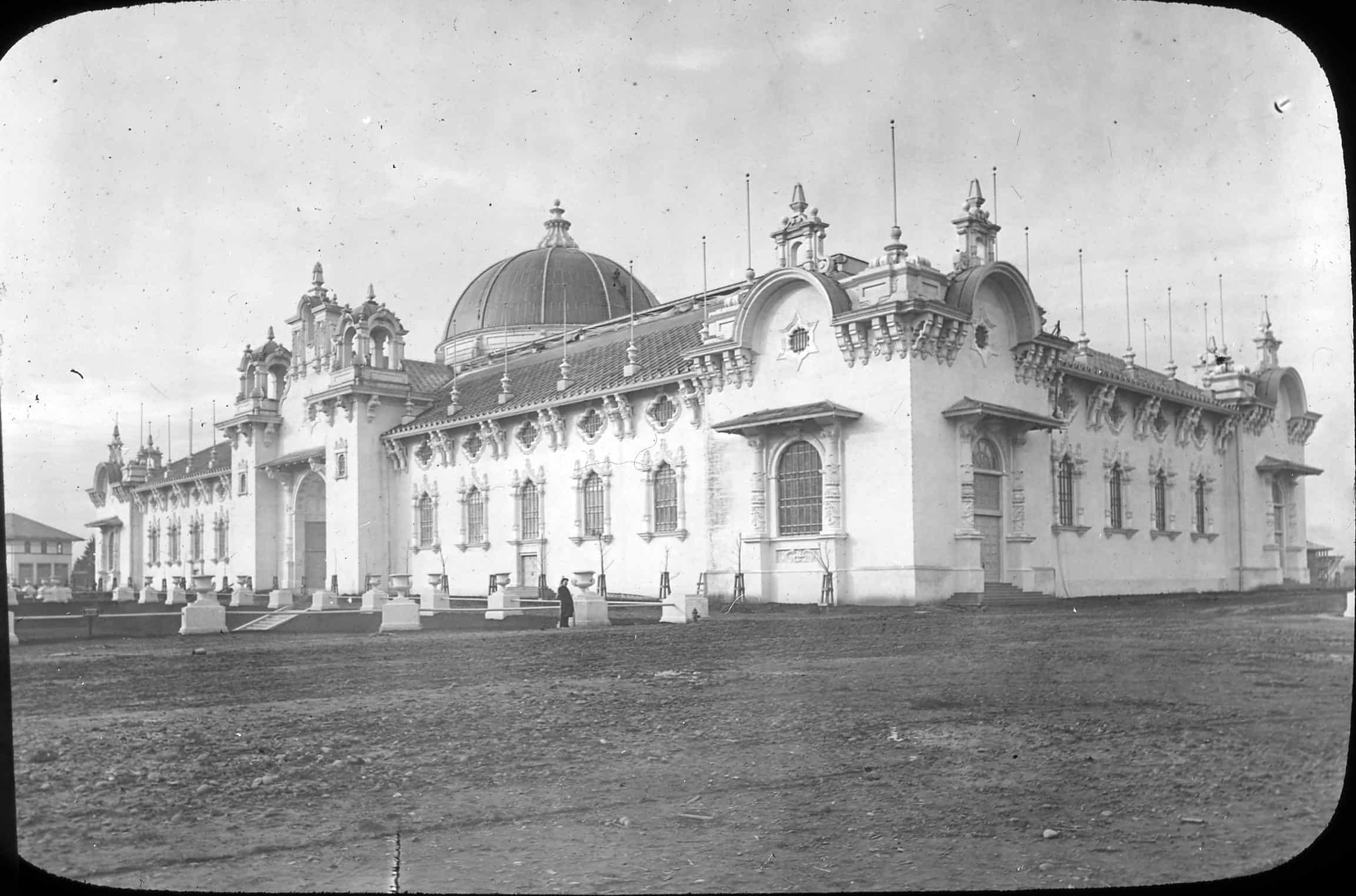 Palace of Agriculture and Husbandry – The colossal Palace of Agriculture was designed by local architect Edgar Lazarus and was prominently positioned along the grand promenade leading to the lake front. Both Spanish Colonial and Beaux Arts influences are seen in this and several other of the most visible Expo buildings.  Edgar Lazarus is best known for his design of Vista House (1918) on Crown Point in the Columbia River Gorge, and The US Custom House (1901) on the North Park Blocks. 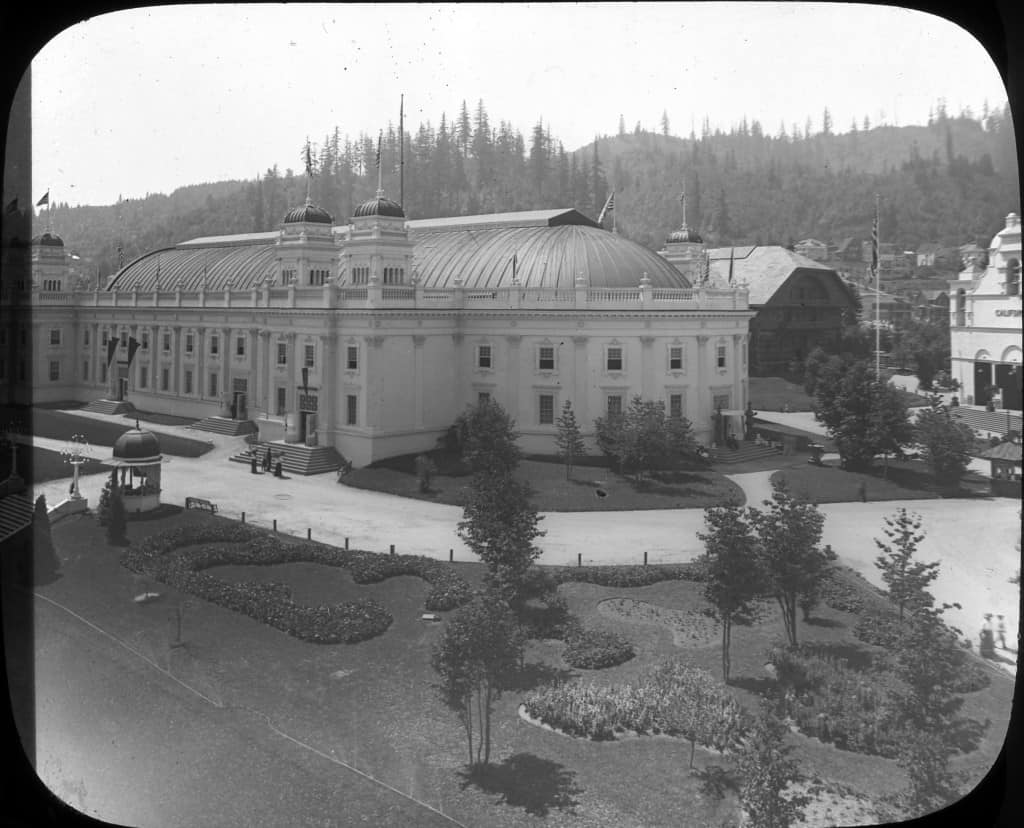 Oriental Exhibit – The Oriental Exhibit was paid for by the state of Oregon and indicates the high priority given to developing trade with Japan and China. Architect Emil Schacht displayed the academically correct massing and proportion of this barrel-vaulted Classical Revival building. Schacht was European-trained and was also an early proponent of the Arts and Crafts aesthetic in residential design. 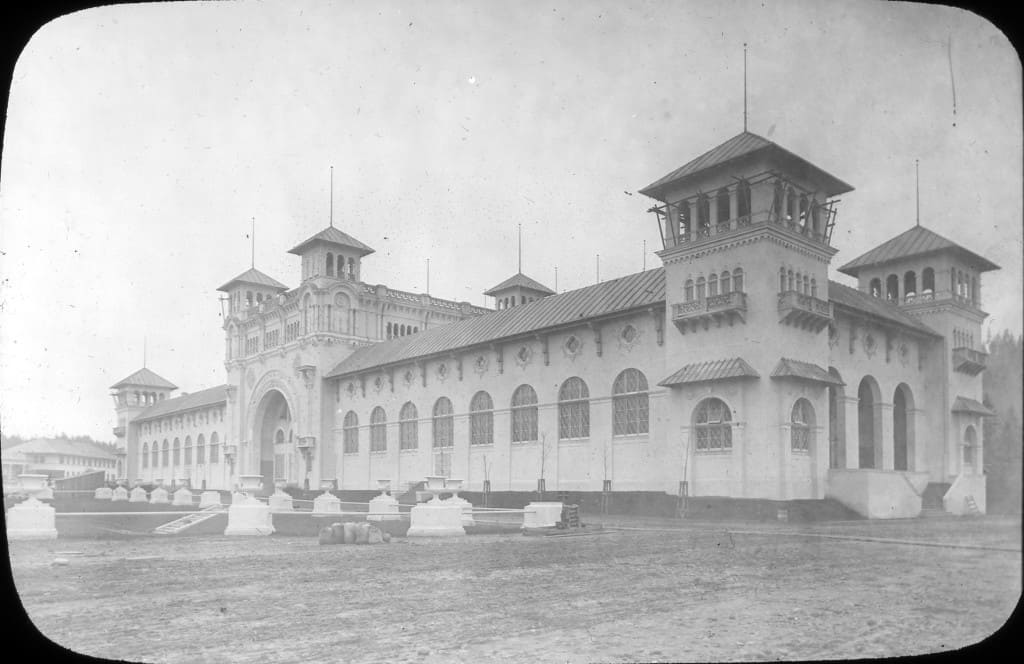 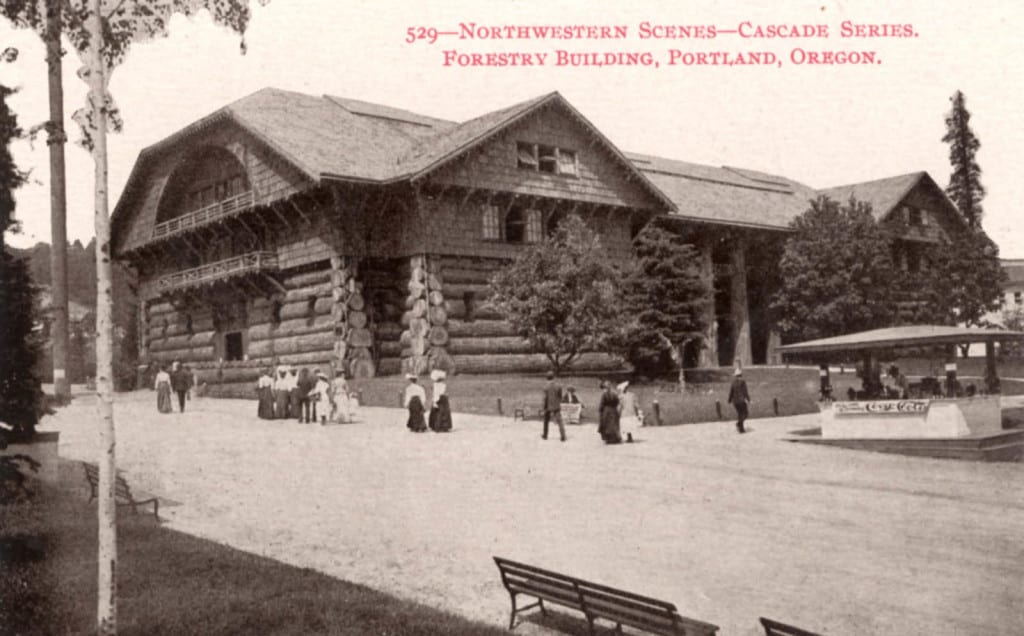 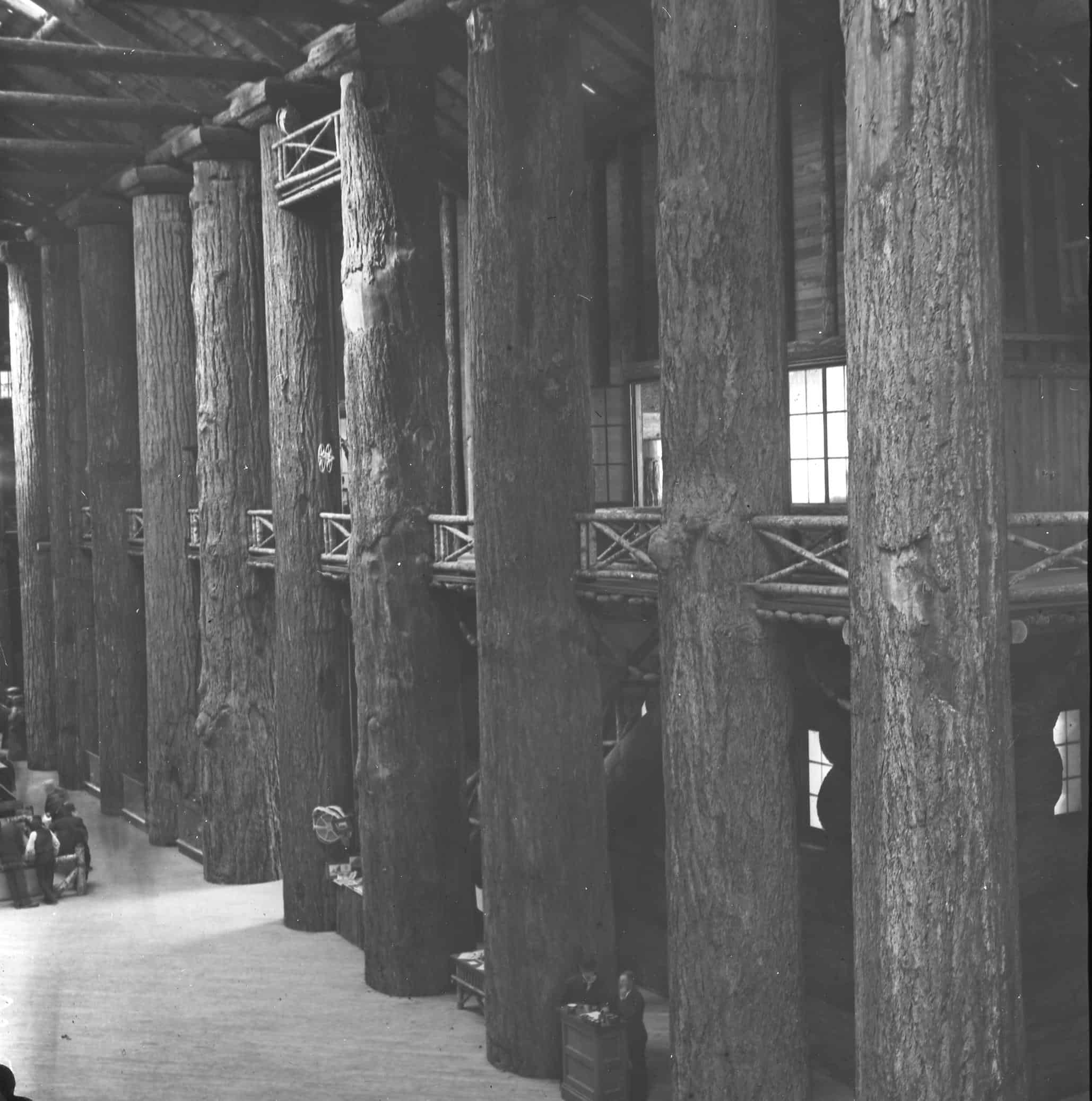 Forestry Building – The much-beloved Forestry Building was the architectural “outlier” of the Expo and exuberantly celebrated the timber industry of the Pacific Northwest. This log behemoth measured 100’ by 200’ and was made out of enormous unpeeled Douglas fir logs supplied by Simon Benson, of Benson bubbler fame. The Forestry Building was one of only a very few buildings to survive beyond the fair. Sadly, this “biggest log cabin in the world” burned in the 1964. A historic marker at the site of the former Forestry Building on NW Upshur Street tells the story of this legendary edifice. 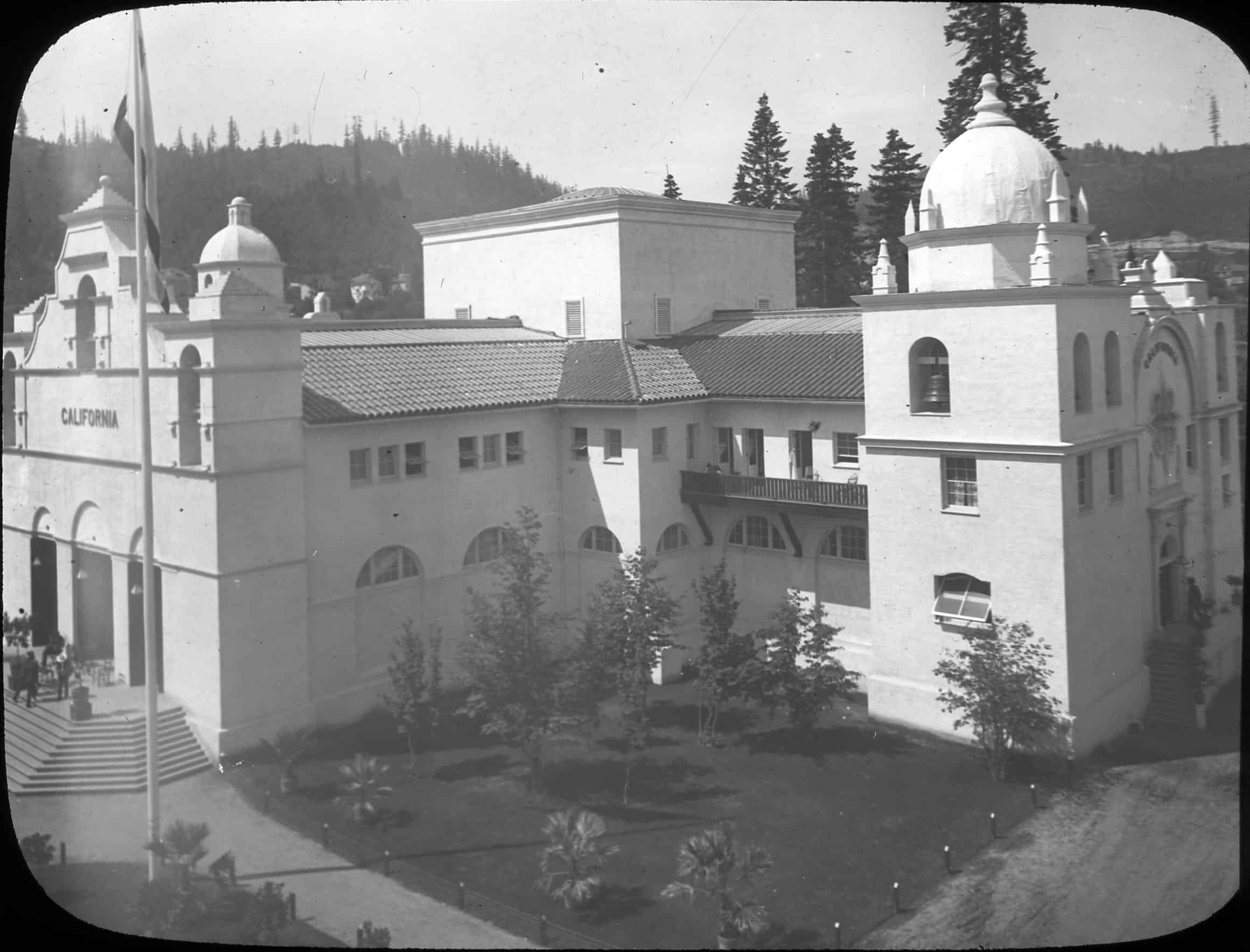 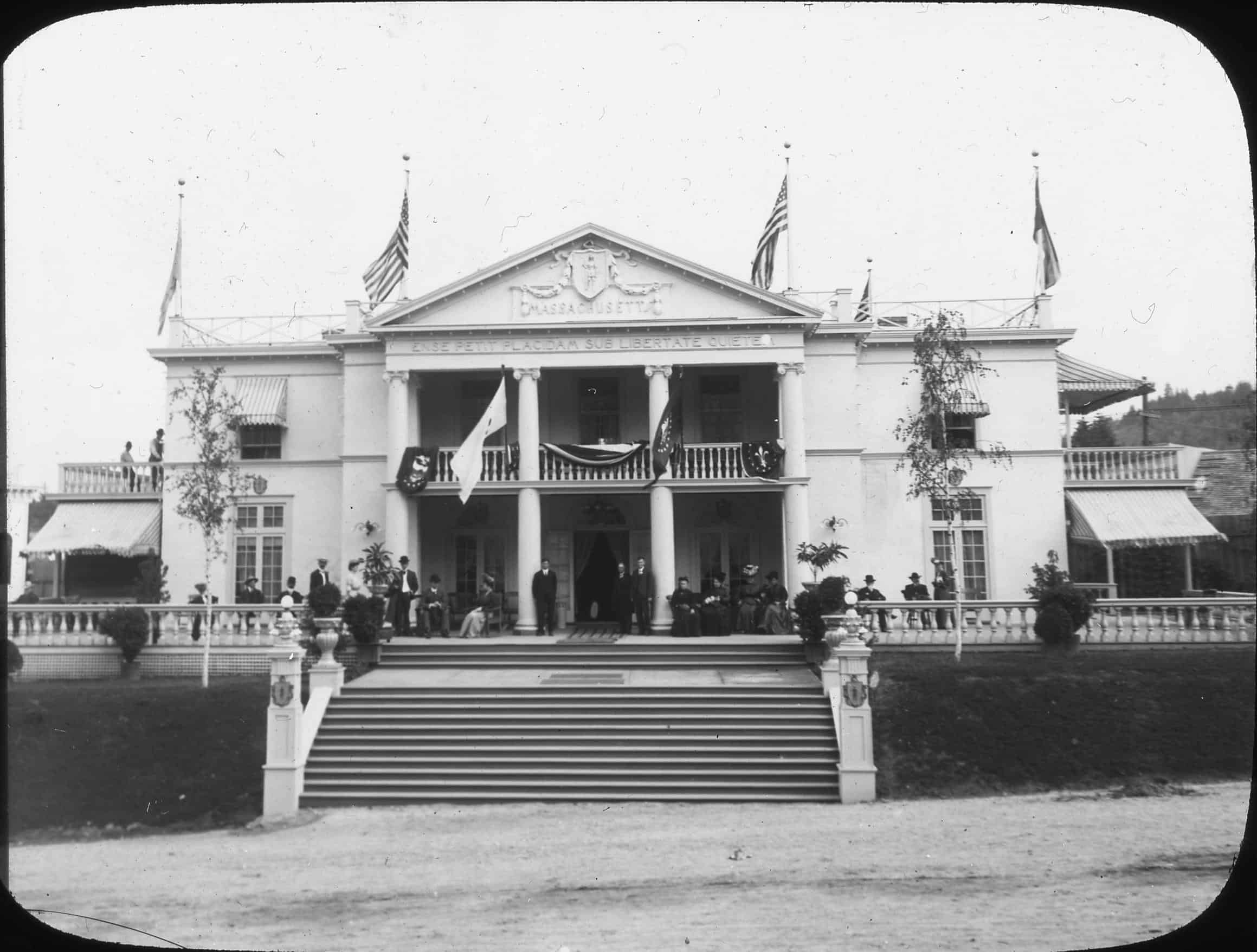 Massachusetts State Building – The Massachusetts state exhibit clearly demonstrates the Classical Revival style from the broad, formal stairway leading to the two-story  pedimented portico, topped by a grand balustrade.   The Massachusetts building survived the fair and was relocated to the west side of Mt Tabor to a prominent site at the end of Hawthorne Blvd. Today the building is part of the Western Seminary Portland campus. Many of the city’s founding families came to Portland from Boston. 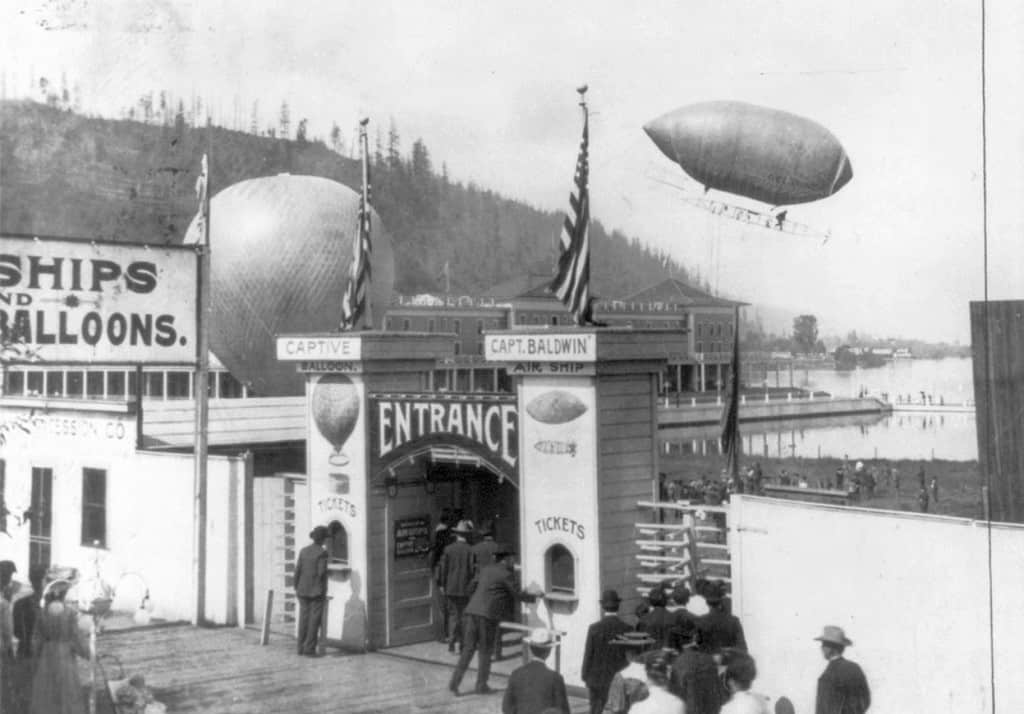 Air flight at Expo – Aviation in the pre-Wright Brothers era was a rather novel exercise in death-defying adventure. A balloon and prototype blimp are pictured in this photo of the entrance to the fair, located at the NW corner of NW Upshur and NW 26th Ave. 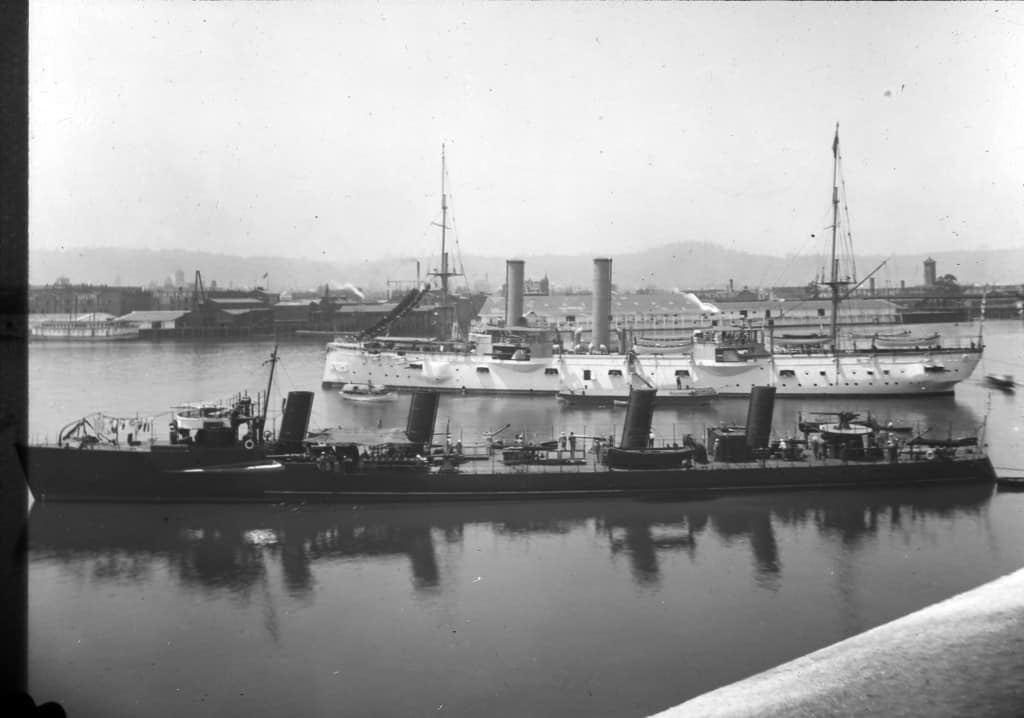 Navy Ships in Guild’s Lake – The fair also featured a naval display and the physical presence of the US Navy. These ships were reminder to fairgoers that after the defeat of the Spanish in 1899, the Pacific Ocean was now dominated by the US. This was certainly a comfort to American businesses considering trade in Asia. 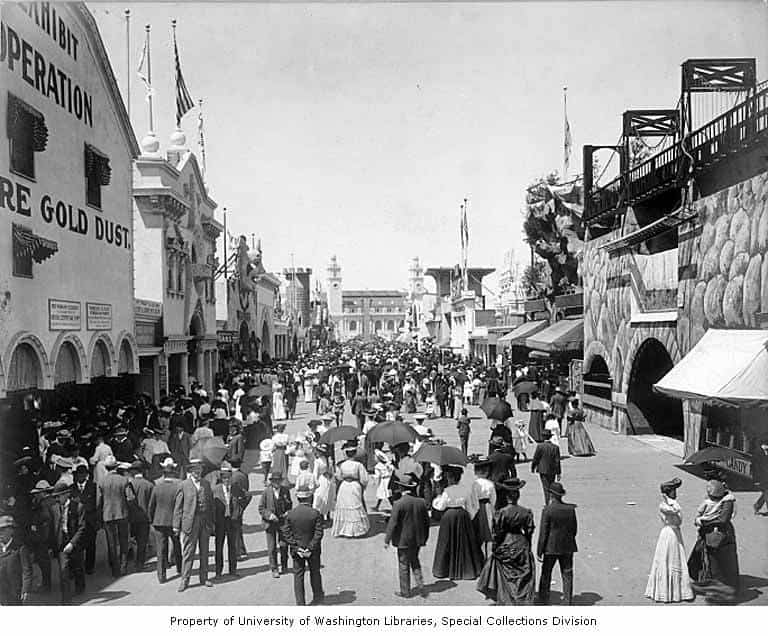 The Trail – The fair even had a “midway” with loudly advertised,  sensational curiosities like those typically found at a county or state fair. This was also an area where fairgoers could purchase a variety of food and beverages. 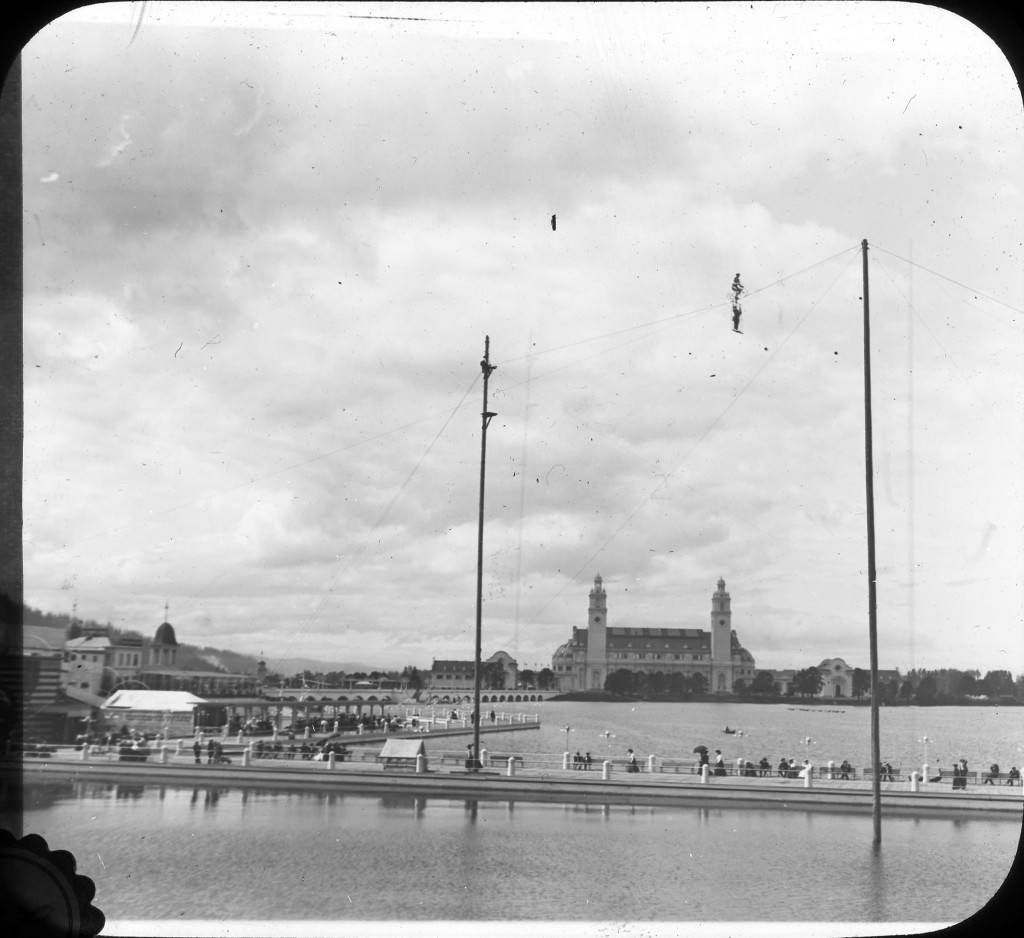 High wire bicyclist – Another view of Guild’s Lake and the US Government Building in the background. Look closely and you will see a bicyclist on a tight wire strung high above the wooden walkway in the upper right part of the frame. The bicycle “craze” in America was soon to be replaced by a fascination with the automobile. 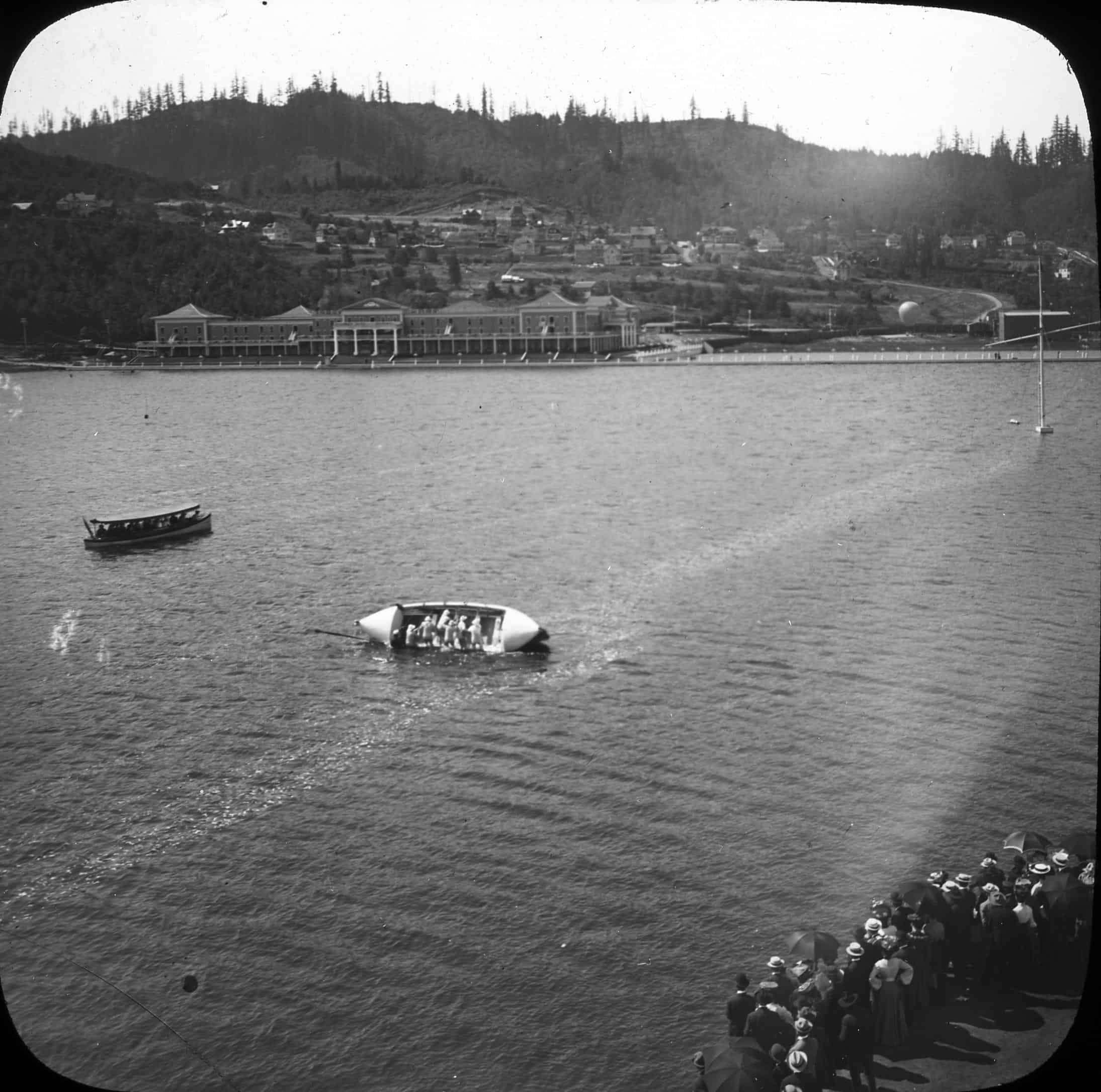 Water stunt – The boaters in the middle of the photo appear to be trying to capsize their boat in the middle of Guild’s Lake…to what end? In the background along the shoreline is the 585 room American Inn that provided on-site accommodation for fair visitors. The west hills of the city and part of what was to become Forest Park can be seen in the distance. 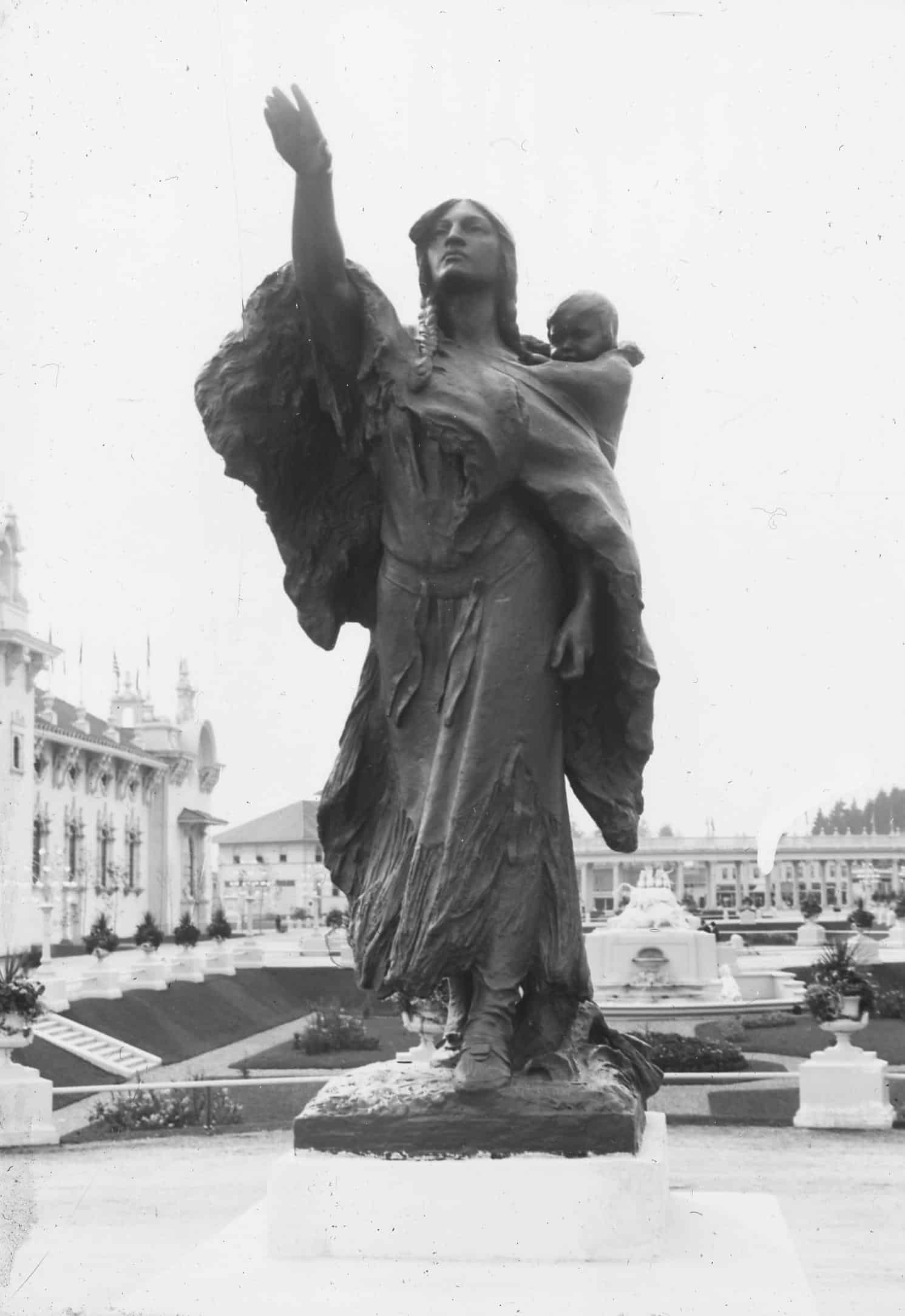 Sacagewea Statue – This bronze statue of the legendary Indian guide, Sacagewea and her son Jean-Baptiste, was created by artist Alice Cooper for the Lewis and Clark Expo. The sculptor has the heroine pointing the way west for the 1805-1806 expedition that established the first US claim to the Oregon Country. The statue was later moved to Washington Park where it resides today. The Sacagewa story was inspiring to women of the day, especially those in the suffrage movement. Historians agree that the Lewis and Clark Expedition would not have reached the Pacific Ocean without the help of many Native American guides, in particular,  Sacagewea. 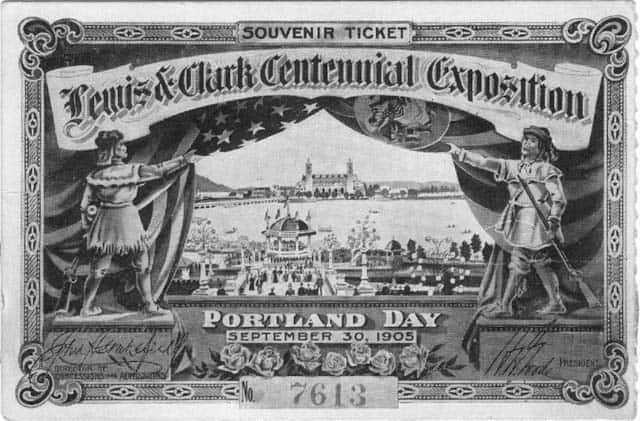 Souvenir ticket – Portland Day – Near the end of the four and half month long festival, the committee declared September 30 to be “Portland Day” during which all city residents were encouraged to attend the fair to show their civic pride. A near record turn-out that day reflected the fact that the Lewis and Clark Exposition was truly a city-wide effort that would have significant positive results for the “Metropolis of the Northwest” for years to come.

For additional reading about Portland Architecture also check out: 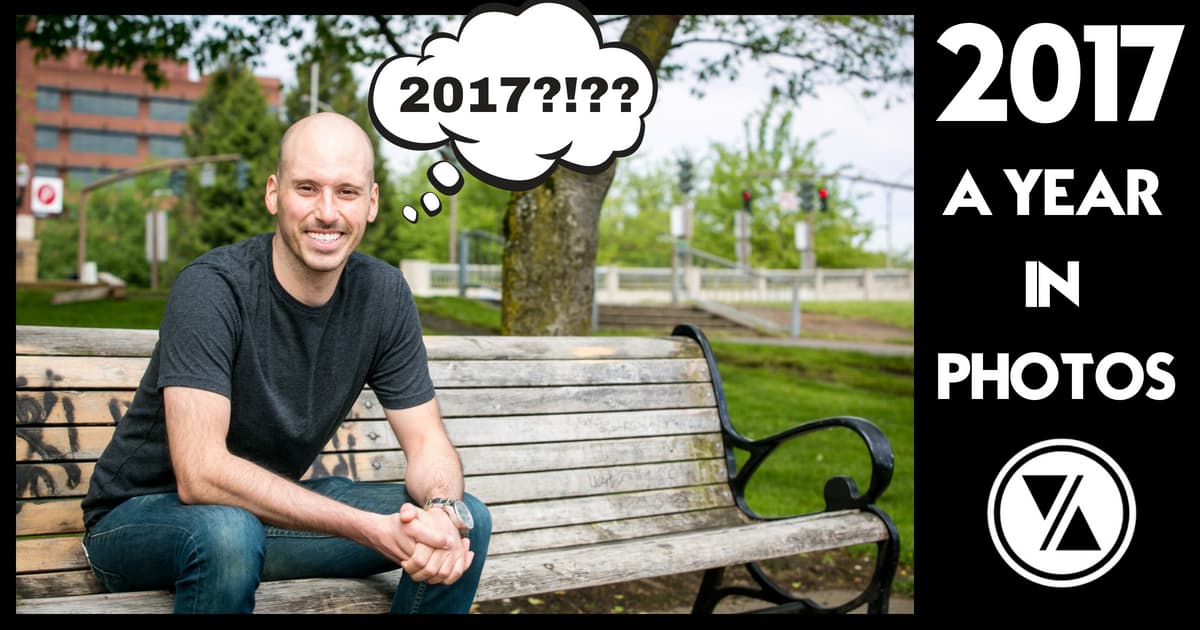 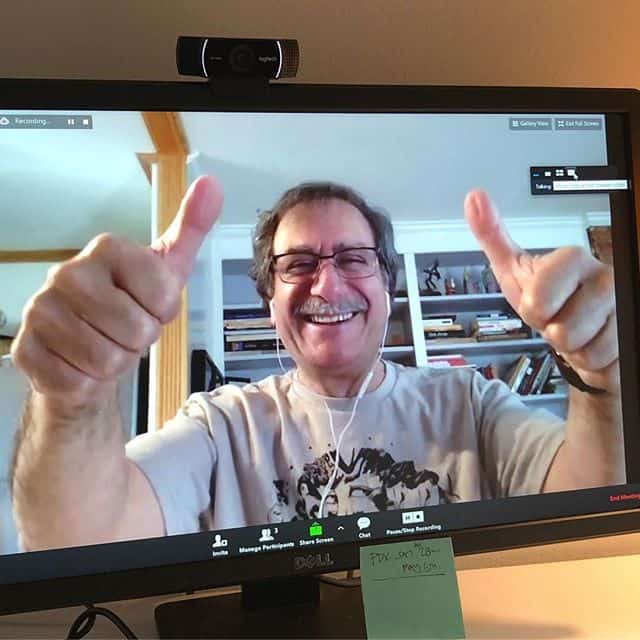 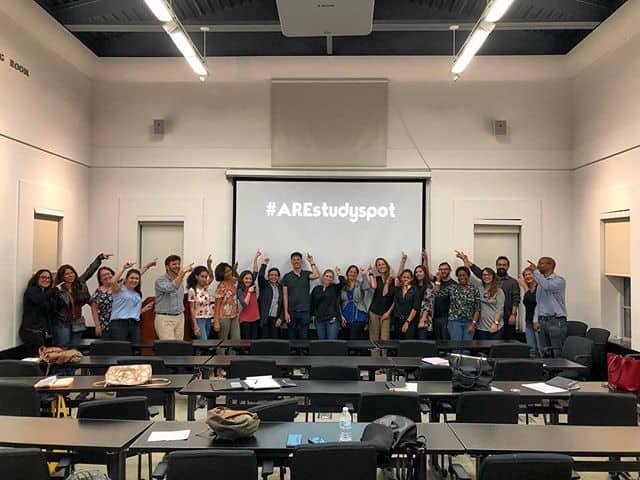 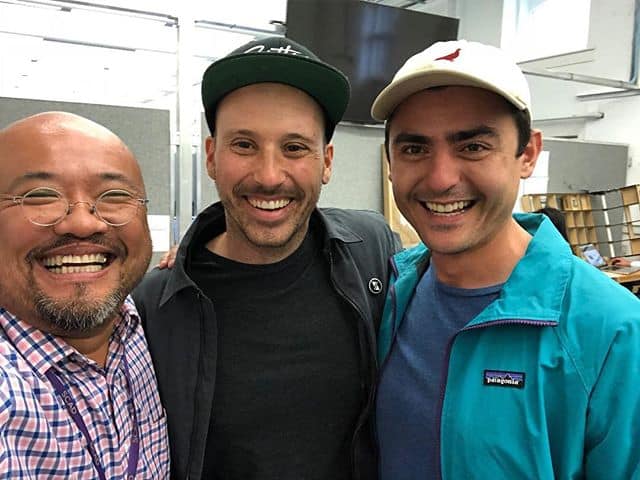